Review of my new novel

Family Value. Nelson, D. L. (author).
Apr. 2010. 324p. Gale/Cengage, hardcover, $25.95 (9781594148736).
REVIEW. First published March 2, 2010 (Booklist Online).
The house at 392 Chestnut Street is a duplex occupied by the DiDonatos and the Marshes. Life isn’t perfect for either family. Jay Marsh, an attorney, is dealing with his dying, estranged adoptive father. Jay’s wife, Carol, a probation officer working with juvenile offenders, oversees a kid who has become a neo-Nazi, and Carol’s whole family is put in harm’s way. Tony DiDonato, an unemployed college professor, has turned to salvaging and refurbishing furniture. His wife, Laura, a safety engineer, has found out that her company’s dangerous chemicals violate the law, but if she turns the company in, she’ll lose her much-needed job. Nelson has painted a sympathetic portrait of families with problems and issues—many of them major. Her keen eye for detail makes this novel a richly textured, realistic view of the modern American family.
— Shelley Mosley
Posted by DL NELSON at 9:11 AM 2 comments:

The saying just ain't so 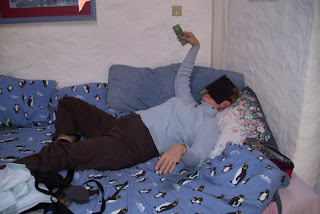 One housemate relaxes on her holiday

There is a saying that fish and guests stink after three days, but in the week-long visit of my Geneva housemate, it is definitely not true. Despite my tiny flat we had the same ease of doing what needed to be doing between good meals, laughter, DVDs and a serious conversation or two. Maybe because although we spend far more time in Geneva, she could never be a guest, just a valued friend.
Posted by DL NELSON at 8:21 AM No comments: 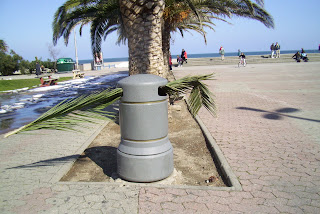 The plan was for a Sunday without budging, staying in sweats, reading, writing, listening to music. But when May called and suggested lunch at a restaurant, I was out the door almost immediately.

We went to the beach which gave us a chance to see storm damage, house-high piles of tree branches, waiting to be carted away. Compared to Haiti, Chile or Fiji this is minor, but the poubelle container speared with a palm I found amusing. I wondered how many poubelle containers it would take at one branch per can?
Posted by DL NELSON at 8:17 AM No comments:

"Tu est belle, comme toujours," Joel, my olive dealer told me as I bought several types for the impending visit of my Geneva housemate. Joel is full of it but fun. The marché stands were set up between the melting snowbanks.

At La Noisette, I saw several people I hadn't seen for a while and there was no choice but to have a chocolate chaud with them. Good thing, because one of my friends is off to Sarajevo for a third time. She donates her massage services to war victims, which has proven to help with the aftermath of the hell they lived through.

Then there was the women's film festival: four films and dinner.

RACHEL: A documentary made by a French7Israeli Moroccan about the death of Rachel Corrie, more meaningful because of the civil process starting in Israel this month and brought by her parents. The debate was not, mainly because the audience was solidly on the side of the Gaza and Palestine.

Dinner followed by A musical interlude honouring the life of Jean Ferrat who died that day.

CAFE TRANSIT: An Iranian film. A widow refuses to follow the custom by marrying her brother-in-law and opens a wonderful café.

Sunday is the fourth film and international effort about a Somalian nomad girl who runs away rather than marry.

The dinner served at long tables where people, all strangers, quickly included me in their conversation. The man next to me wanted to make sure I knew exactly what I was eating and the history of the wine.

Apero with a white wine sangria, olives, chips etc.
Endive, apple, cheese, walnut salad
Beef Burgundy (melted in the mouth) with pasta
Mousse chocolate
wine
water
A second dessert was offered after the last film but I did not go.

All this was put together by our local film association made up of volunteers. The total cost 23 Euros (US$31, CHF33)

Although there's many ways to celebrate a day in March and just being alive this was a great one.
Posted by DL NELSON at 3:32 AM No comments:

I wish I voted in Maryland where Murray Hill, Inc. is running for office.

Yup, Inc. Murray Hill is a corporation. Since the Supreme Court has ruled that corporations have the same rights as people, isn't this the next logical step.

Would the Honorable Junior Senator from Texas, Mr. Exxon please take the floor?
Posted by DL NELSON at 3:53 AM No comments:

Great video of our carnival etc.

And this week is our feminine film festival four films from different countries including one on Rachel Corrie, an Iranian, a German, and Somalian plus dinner for all of 23 Euros.

Doctors are on strike...they want to get 13 Euros per appt. in place of 22. And of course that is covered by insurance for everyone.

The snow is melting but there are still many unplowed streets.
Posted by DL NELSON at 1:54 AM 1 comment:

It's going to snow tomorrow 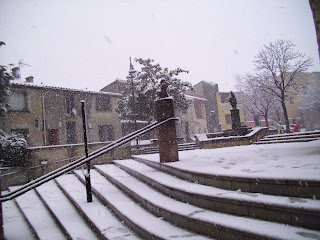 My Swedish and French neighbours were sitting around my table, the remains of a raclette in the centre as we finished our dessert.

Sylvie announced the meteo for Monday. Her partner Alain shuddered. He had lived in Haiti for years and is definitely a warm weather person. The two of them and their dogs had been gone a year, taking their boat across the Atlantic and back.

Bjorn and Kristin, were no happier, having come down from Sweden to work on their future retirement home and to escape their own too-long winter. 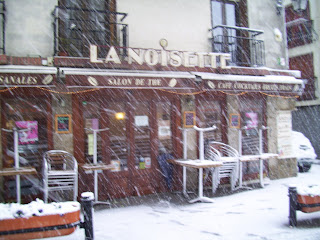 When the rain pounded on my roof, Alain, the ever hopeful one, "It is too warm too snow."
Sylvie placed her faith in the meteo report she had heard. 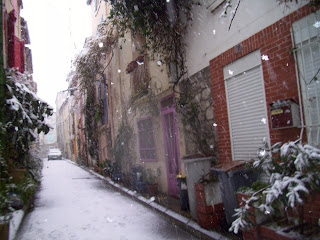 Thus, this morning, when I woke, the roof across the street was white. Now compared to living in New England, nor my daughter's recent imprisonment in her apartment in Washington DC with dwindling supply of ice cream, the snow is nothing. But for the south of France, it is a big, big deal.

Thus today will be a writing day. I have some corn chowder on the stove, the score from the Double Life of Veronica is filling my flat with haunting music, and my New England/Swiss soul is happy.

Note: The angels are for you Rose.
Posted by DL NELSON at 2:40 AM No comments: 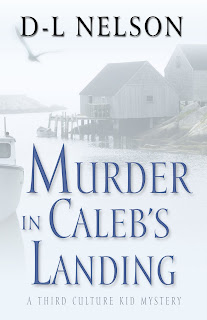 I have the cover for the book that will be published in the fall. My first mystery. It does capture the New England feel.
Posted by DL NELSON at 11:59 AM 3 comments:

"I was born in that house" 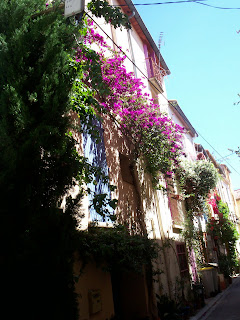 I was ambling down the street with one of the mamies, one of the Catalan grandmothers. We ambled because she had a cane to help her poor hip. Even the word amble might convey more speed than we were making. It was a bit of shock for me to discover although I thought of her as an elderly woman, a grandmother of the old fashioned rocking-chair type, she was only a couple of years older than I was.

The mamies have always been a part of Argelès for me. They are old women in house dresses and aprons, gray-hair pushed into buns. They often put their chairs on the street, knit and talk in fast Catalan. Sometimes they gather on benches near the beauty salon to share their lives.

One by one, the mamie told me the history of the house. Where the Swedes are now redoing their house, a fisherman with a long beard lived. Soldiers of all colours occupied the house next to where Jean-Pierre and Babette operate the little grocery store. The Danish journalist's house was very tiny, she said, still is and a man lived there all alone. He wasn't friendly, but he had a long beard too. I learned who was great with a needle, and who had well-behaved children, who taught and who lost children during the war.

When you live on a street with houses 400 years old, there is a lot of history that will never make a history book. The street is very international now: Danes, Swedes, Swiss, English, French, Catalan and a German.

The mamie pointed to another house. "English bought this one. They might need friends. You should say hello."

I will, not because they are English, but because this is a village where we know our neighbours. For years, the Catalans were not sure about the newcomers, but once our flamboyant Danish film director threw a street party the atmosphere changed. Mixing varies, but it is impossible not to share something with everyone be it a cup of tea at La Noisette, a move at the theatre around the corner, or a conversation with another woman as we amble home with our baskets of vegetables we bought for lunch. I doubt, despite the demographic change, if if is that much different then it was in this woman's childhood or 40 years ago when some of the houses were built.

I love having my moment on this street.
Posted by DL NELSON at 1:24 AM No comments: 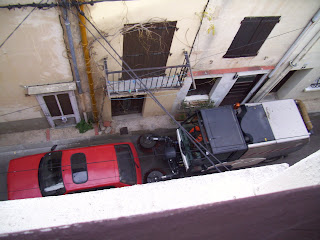 John Wayne was no where to be seen and do not forsake me oh my darling did not sound, just the street cleaners horn, loud enough to disturb the rest of those in the cemetery 10 blocks away.

The houses on my street were built between 1400 and 1700 and although the facades have been done and the insides probably changed a few times each century, the street is still narrow. Built to allow space for people and sheep, there is space for only one vehicle at a time, and not a wide one at that.

Argelès is fanatic about cleaning its street, and thank goodness it no longer uses the vomit-producing lemon scent that clogged the sinuses and made chocking the only alternative. Still the machine comes around regularly.

The car belongs to my neighbour Yian, a young man despite having a bit too much testosterone, has a very sweet side. We have a sugar-borrowing relationship, although he is more apt to borrow and I am more apt to use his muscle for lifting stuff. I have noticed it is only the locals that will park on the street. The others will drive up to deposit packages then take their cars to the river or the library parking lot, a short walk away.

Yian was in no hurry.

The street clear was.

The street cleaner inched the machine towards the red car.