It started out as an ordinary stop at the post. My friend Pierre and I were chatting in line, when a man, wafting a strong odour of alcohol, came in and tried to push in front of the line.

Unsuccessful he picked up my American accent as I was speaking French to Pierre. "You don't belong here, you're not European." Then he spied the Swiss identity card that I was holding ready for my turn in line. "Swiss are racists. Swiss steal people's money."

I turned my back to him. "You don't understand what he is saying?" Pierre asked in a whisper.
"Sadly, I do." We were still in French.

As the man continued his rant and I continued to ignore him, I noticed several people had placed themselves between me and him. The person ahead of me gave up his position for me without me asking. Getting no reaction, the drunk staggered out of the post.

No one said anything. One person checked to make sure he was gone. There was a certain amount of embarrassing feet shuffling. I smiled keeping my back straight as I finished my business.

When 9/11 happened strangers from everywhere offered condolences. This later turned to nasty remarks about Americans whispered behind and sometimes in front of my back after Abu Grahib. Any mention of the name Bush brought frowns. I saw jubilation at Obama's election and more congratulations from strangers.

I do not make either Swiss or American domestic or foreign policy, although I wish I did. In the later it would far different, in the former, I would tweak a couple of things. This was the first time I have faced criticism for being Swiss, and never for being two nationalities at the same time.

The last thing Pierre said to me was, "Don't be upset. He was drunk. He was crazy."

"All nationalities have some." I said appreciative of the undercurrent of protection I'd received.
Posted by DL NELSON at 7:21 AM No comments:

The evil black and white box.

I knew it was trouble when my cable company announced they were sending a new and improved decoder. No extra charge.

I’m not a technophone. I use the computer hours on end every day, but “New improved” usually means that they’ve taken what works wonderfully and mess it up.

Take the new Microsoft office suite. What used to take one click to do can take anywhere from 3-5 at best.

Then my web server upgraded which meant at least 5-10 clicks to do what I used to do in one. I will give them two improvements hidden in the many inconveniences.

The new black and white box arrived within 24 hours. I read the manual. Manuals in English are often as incomprehensible to me as those in French.

On the street I got down on my knees and begged Pierre to come help, which he did. He attached everything like the manual said. The screen read patientez to connect. Three hours later of patience and no connection.

I don’t want to bother Pierre again. I called the television technician. He can come Jan. 4. I was able to reconnect the old decoder box.

I would take a photo of the box, but I suspect like some evil spirit it would not allow itself to be recorded.
Posted by DL NELSON at 3:11 AM No comments:

I think I'm going to miss you for a long, long time

That is a lyric from a Linda Rondstadt song.

Today I received an email from the partner of the friend I lost a few months back, a friend of over half a decade with whom everything we did was shared. With it was a photo of the two of us together in Geneva, and it removed the cover on the hole that her disappearance has left.

Her friendship was worth the pain but I still wish she were here so we could talk about it.

However, the only thing I would exchange for the pleasure of looking at the photo and the memory was to have her back again.
Posted by DL NELSON at 8:23 AM 1 comment:

A typical Argeles morning with a couple of variations 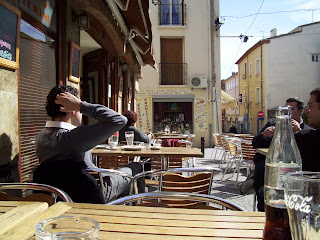 After watching Max Keiser, I went out for my daily walk, a 30 min project give or take.
Annie, the woman who owns the framing shop, was back from vacation and we discussed what a good time she had.

Madame Martinez gave me a hug. Her dialysis is going well. She’s the lovely neighbour who waters my plants when I’m away, and sometimes when I am home.

As I passed La Noisette I was invited for a tea with Pierre and Frédéric followed by a conversation with Christine who was walking by. We set up a lunch date for next week.
Then Stephanie who has the new restaurant on the street came by with 18-month old Margo. Margo, has a love—Jean-Pierre who is the owner of the épicerie on the corner. Whenever they see each other it is like a sunshine storm. He takes Margo out of her push chair and they walk up and down the street. He doesn’t mind bending over, and she holds tightly to her fingers, although today for the first time, she has advanced to one finger. Her entire body is smiling. So is his.

Anne, my new neighbour across the way, stopped me. “I met a Danish couple last night who know you and want to see you. They’ve stayed in my house, she said.

“Was the man dressed in black and flamboyant? His wife in white?”

She nodded. “Tomorrow night at 5 p.m. we’re getting together. I’ll find out where.”

“YES!” I&K, my favourite film director and surgeon. I wandered to the house where they stay, but they were out.

I stopped at my friend’s Barbara to tell her about I&K and finalize dinner plans for Wednesday night.

Then I picked up some fruit and talked with Babette, the wife of Jean-Pierre.

Spike, the cat, was waiting outside the store. Now Spike is not a stray, but Jean-Pierre always puts a bit of food out for him. As soon as I told Jean-Pierre about Spike waiting and his having returned Margo to her parents, he rushed out with the box of kitty food. Spike has fallen in love with Mr. Bill, Jean-Pierre’s aging poodle. Whenever the dog is taken for a walk, Spike appears and walks along side of the dog. He has also been known to curl up next to him for a nap. However, Spike is forbidden entrance to their house ever since he tried to mark it as his territory, an error that has been forgiven, but not forgotten. Spike does have an owner at the other end of the street, but he believes the entire street and everyone on it, is there for his benefit.

Marie-Christine was sweeping the street in front of her house and we exchanged the fact we prefer cleanliness to a messy house. She shares my love Emily Dickinson.

My last stop was at Jackie and Pierre’s, neighbours for Switzerland who are down here for the Toussaint holiday. Although I only intended to stay for a moment, it resulted in tea and Egyptian pastries and lovely conversation catching up on the news since we last saw each other in August.

At one time I was worried that in Argelès, I would be lonely. When I told my daughter that, she laughed and laughed. I wonder why...
Posted by DL NELSON at 3:37 AM No comments:

The chimes ring, and I look out the window and see that someone has pushed my doorbell.

Now, most of you will think this is nothing, but from my 4th floor (American) and 3rd floor (European) loft in this centuries old house with walls thicker than the length of my arm, I never thought it would be possible to have a doorbell.

People stood in the street and hollered my name.

Thus when a visiting friend offered to put in a doorbell, I nodded doubting the possibility.

Within in 24 hours I had a doorbell. And I can select the music. Too bad I won't be here at Christmas to listen to a Jingle Bell song when some comes visiting.

This is truly a gift that keeps on giving in the most wonderful way.
Posted by DL NELSON at 1:16 AM No comments: 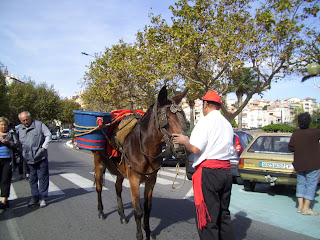 J and I sat overlooking the beach in Banyuls-sur-mer waiting for the fête de vin to start. Waves crashed on the beach, the water thrown by the Tramantane howling overhead.

"Look," J said and pointed to the sky.

Birds trying to make headway into the wind were truly flying backwards. No matter how fast they flapped their wings, they went in the direction of their tails, not their heads.

It was a lovely start to the fête. Music announced the parade made up of children with grape leaf crowns, a band and donkeys laden with grapes. The harvest was put into tubs and the children stomped on them as they would have in the old days as the band played that old French song, "Down by the Riverside". A priest gave his blessing to the harvest, and unlike during last year's, the donkey's intestinal track made no donation to the event.
Posted by DL NELSON at 11:06 AM No comments:

Murder in Argelès:
A Third-Culture Kid Mystery
D-L Nelson. Five Star, $25.95 (338p) ISBN 978-1-4328-2551-5
Those looking for an offbeat alternative to conventional crime dramas will enjoy Nelson’s suspenseful second Third-Culture Kid mystery featuring freelance tech writer Annie Young (after 2010’s Murder in Caleb’s Landing). At the end of a business trip to Zurich, Annie, an American who grew up partly in Europe, is looking forward to getting back to Argelès-sur-mer, France, where she has a small apartment, and meeting her handsome priest friend, Père Yves. But when she enters Yves’s church, she discovers his body crumpled on the floor. Annie reluctantly turns for help to her ex-boyfriend, Roger Perrin, the town’s police chief. When Roger returns with Annie to the church, however, Yves’s body has disappeared. Still, blood on a broken angel statue suggests foul play. Nelson elegantly weaves historical fact and fiction in a whodunit whose heroine discovers more than just the guilty party. (Dec.)
Reviewed on: 10/03/2011
Posted by DL NELSON at 11:34 AM 1 comment: