My best present is curled up in the next room reading a book. Having my daughter with me both Christmas Eve and Christmas day, is a treat. Even when she was little, her holiday was divided between me and her father, which we thought was fair. Only a couple of years ago, did I realise she wanted to stay home. As she said, "I didn't think I had a choice." (note to parents--look for what your children don't tell you.)

And then there are the years that neither of us can travel to the country where the other is living. Phone calls, emails and now Skypes are not the same as having her in hugging distance.

I sometimes envy parents whose grown children live in the same city or same area. On the other hand, I am lucky to have been blessed with knowing this kind and wonderful woman and sharing so much even after she left my roof (or rather I moved the roof and she began her own life).

Thus my walking-talking Christmas gift keeps on giving me great waves of happiness not just for two days, but for my lifetime.
Posted by DL NELSON at 2:45 AM 2 comments: 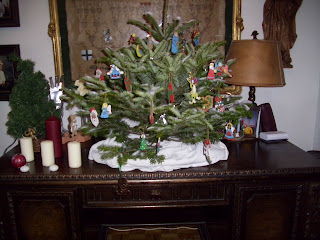 The longest night is coming, and for me that is more important than Christmas. It is the end of the old year and the beginning of the new. It is very important to me have something evergreen in the house as a symbol of the end of one year and the start of a new year. Every year, no matter where I am, I make sure I bring in at least a tiny evergreen branch.

The tree is tiny, but it's real. I've put cotton on it to reflect snow. I don't use lights or real candles as so many people who live in parts of Europe do.

It might surprise people when I say last year was a good year. One might disagree pointing out I had four eye surgical procedures, breast cancer, 27 nukings, and I lost my oldest and dearest friend. She's crazy, people might say.

On the other hand, I now see better, I've had wonderful medical care in the Swiss health system. I've made new and cemented old friendships, had a good writing year and seen another book published with a contract for the next, found a wonderful partner for my business, enjoyed trips to Saskatchewan, Scotland and Germany. I've laughed a lot. I watched a good friend turn 75 surrounded by people who love her. My daughter is in grad school in Edinburgh.

Soon the sun will bring longer days. In the spring new plants will once again push up through the dirt. To get to the new year, I celebrate the longest night.
Posted by DL NELSON at 9:17 AM No comments: 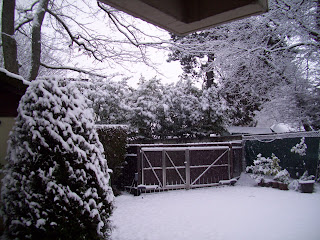 I usually love the first snow of the season. It hides the world and is an excuse for lots more hot tea, fuzzy socks sweat shirts. I get lots and lots of good writing done. I can play Christmas carols and I'm Dreaming of a White Christmas seems like more than a dream.

Today I don't love it. My daughter is due to fly in from Edinburgh. We were going to go the Café Soleil, a first meal tradition.

We've talked twice this morning, and I've emailed her ways to get here by bus. If the new bus routes in the city are confusing to those who use the system daily, she may end up in a strange place not realizing what bus goes where. That is if Cointrin stays open...please, please, please let it be open.

At least the The car will stay in the garage -- despite years of driving in New England snow, it is not my car and my housemate is too nice a person to have to be told that now is the time to buy the car she was vaguely considering buying because hers is a heap on the side of the snowy road. Geneva has too many drivers from tropical places and they don't know how to drive on a snow-covered road.

As much as I love living here with the view of the lake, this would be a time that it would be great to be in my old flat within walking distance of the airport.

Still, the most important thing is that my daughter gets here safely, no matter what time.

Meanwhile I'll drink tea, write and listen to carols but NOT I'm Dreaming of a White Christmas."
Posted by DL NELSON at 12:23 AM 1 comment:

I took this photo 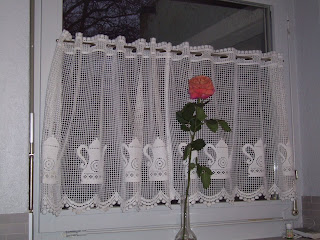 I took this photo just because it made my eyes happy.
Posted by DL NELSON at 12:22 AM No comments:

My housemate led me to the attic to show me the spare mattresses. "S will probably be borrowing one." S is a neighbour and she has more guests than mattresses and beds. My housemate has more mattresses and beds than guests. In fact, since I'm alone I could sleep in a different bed each night for a week without being charged with sluttishness. And even when my daughter and good friend show up for Christmas they too can sleep around (the house).

There is a group of friends who do what they can to help one another out. S was one of the lovely people who drove me to be nuked and when she left on holiday, she found a friend who would do the same.

Sure enough S showed up with her son and took a mattress. I showed her the extra slatted frame.

"My husband and son will be back for it," she said.

They came, they conquered, they discovered the mattress too big for the slatted frame.

"Would it be too much to ask you to measure the other ones?" she asked in an email.

I wrote back, I would go on a measuring tape safari the next morning, which I did and found smaller ones. "Better have your husband double check me, though, I'm a number numbskull."

Within a few minutes Hubby and Son were back with measuring tape for the mattress swap.

As I pushed the button to close the gate after the car with the departing mattress drove away I hoped every will sleep well tonight.
Posted by DL NELSON at 1:01 AM No comments:

My new book won't be shipped from Amazon, wrote a friend who buys all my books. I don't ask her to, but I'm glad she does. She wrote about the delay "as you know, patience is not my strong point. I pray every night,'God please give me patience and I want it NOW!!!'"
Posted by DL NELSON at 1:15 PM No comments:

One of the saddest days

Part of me will always love the man I thought my ex-husband was. After trying everything, I divorced the real man.

Part of me will always love the country I thought I grew up in. Like trying to save my marriage, I tried everything. I’ve made hundreds of overseas calls to Congress and sent thousands of emails. I’ve followed legislation from committee to signing. Most was about Bill of Rights issues such as the loss of habeas corpus. If the president does not veto the new amendment just passed by the Senate, than the military will have the power to arrest anyone, anywhere with no charges, no trial indefinitely. I have made no calls and sent no emails on this one. I am disengaging.

Today I divorced my country. The decision was not easily reached with too many facets to recount here just like I won’t recount the whys of my divorce to my ex-husband.
The U.S. Consulate is in Bern. The rain on my umbrella drowned out normal street sounds.
I was told I could tap on the door. A guard came out and growled I couldn’t bring in my pocketbook.

“The bakery down the street to the right will keep it for you. Three Swiss Francs.”

The woman at the bakery was friendly and told me I also had to leave my phone, my camera and my medicine. I could take my wallet and my passport.

Back at the consulate there was an airport-type examination, and then I went down stairs for a second examination. This man was friendly and we chatted as I waited my turn.

A woman called my name and asked for verification on the information I already provided.
Then the Counsel came out, a thin man with glasses.

He told me that my decision was irrevocable—I could never live or work in the U.S. again. I could never get my citizenship back--not tomorrow not in 30 years. I signed that I understood.

He asked me to raise my right hand and swear that I was renouncing. My eyes blurred. “Are you certain you want to go through with it.”

“Then I would take this back and we could probably . . .”

Within two weeks to two months I will get my cancelled passport and my certificate of renunciation. I will then pay $450. I can take that around to the banks so I can resume normal banking relations because I will not be subject to U.S. FATCA legislation that has caused so many problems for Americans and will continue to cause problems and other financial institutions. If Switzerland and the US do not come to agreement about the US have access to Swiss police records, it is possible I would need a visa to enter the U.S. It is also possible I wouldn't get one. I knew when I started this that I might never be able to enter the U.S. again.

Leaving the consulate to retrieve my bag at the bakers, I vomited.

Like the day I was divorced, this was one of the saddest of my life. I don't regret the choice.
Posted by DL NELSON at 10:19 AM 5 comments: 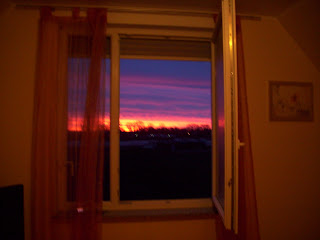 The sunrise our last morning in Insel Poel, I had to do a sunrise alert to my housemate who quickly got her camera.
Posted by DL NELSON at 12:28 PM No comments: 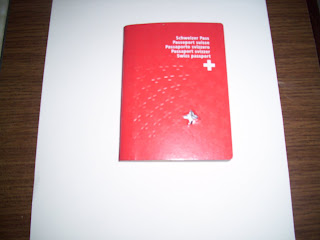 I will admit I swallowed hard when the passport control invalidated my Swiss passport albeit for a good reason. I was about to do the necessary things for the biometric passport. There was a glitch. For some reason after my first Swiss passport was stolen in Barcelona a few years ago, it was still listed as valid.

This will be solved.

Rather then get my new biometric post in the mail, I will pick it up at passport control and sign a declaration of the theft in Spain.

After Monday I will have no passport until the biometric is in my hands. Fortunately I can still travel between European countries with my Swiss identity card, but I can't go to the US, Canada, Australia and many other places until all is sorted.
Posted by DL NELSON at 12:24 PM No comments: