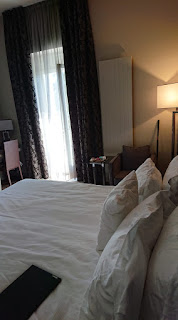 My husband posts photos of the beds he sleeps in each year on Facebook. Most years it is in the high twenties or thirties because we travel a lot.

Our sleeping around this year came to screeching halt. The photo above was in Ticino, Switzerland and was bed six. One and two were our real beds in Argelès-sur-mer and Geneva.

The pandemic put an end to our travel plans to Ireland, Scotland, Austria and his plans to several places in the U.S.

When I traveled professionally, most of the hotels I stayed in were chains. I was there to sleep, eat breakfast if I were lucky before going out working all day and sometimes into the night. There was one period when I was on the road for a couple of weeks with a different Holiday Inn. Monotony but at least most of the bathrooms were in the same place which helped in the middle of night.

I do love staying in hotels. Especially in Germany, I loved the breakfasts with all kinds of breads, cheeses, fruits, meats, juices, hot chocolate to select from. Although one of the best breakfast buffets I ever had was in Malta that dwarfed the German ones. It is only a slight exaggeration to say one almost needed transportation around the offerings.

When we did travel more, Rick delighted in finding interesting beds in hotels or in BnBs. 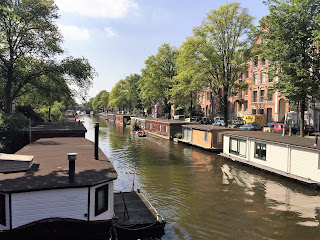 I loved the week on a houseboat in Amsterdam. We waved to boats going by. It was a BnB and it was fun having all the basics but not much more. 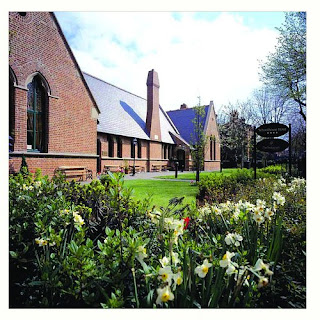 A Dublin hotel was in a remodeled schoolhouse. Each name bore the name of a famous Irish writer. The Irish fry up rivaled the English breakfasts. 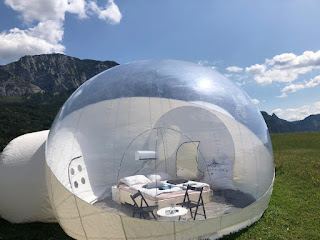 "How would you like to sleep in a bubble?" Rick asked. I would. We did. The photo is not the exact bubble but close enough. Ours was on top of a roof and we went to sleep seeing the top of pines and stars. The owners had champagne and roses for us because we told them it was part of our ongoing honeymoon. In the end we ended up having a Thai meal cooked by the owners' daughter and a conversation as the sun set over the valley. 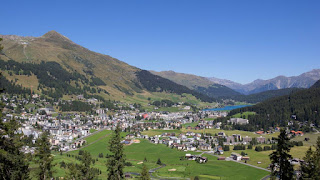 In Davos we stayed where Merkel, Clintons and Obamas had stayed during the World Economic Forum. We took Sherlock and they had a puppy bed, puppy dishes and puppy treats waiting for him. Each time we walked through the lobby the staff would greet the dog than remember we were there too. While he played golf Sherlock and I walked around the area. 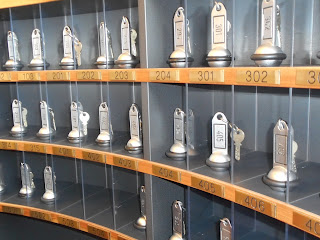 Twice we've stayed in a typical Swiss hotel in Bern with a cage type elevator.

And we were the last and only ones in a Gruyere hotel before they shut down for a pandemic. It gave us a chance to chat with the owners/operators and listen to their survival concerns.

There was a hotel in Neuchâtel where we stayed for a reunion overlooking a brook. It had a turret and they had left books to read in the sitting area.

Or the most beautiful blue stenciled on white Victorian furniture in a hotel when we were on a Museum visit in Lucerne. 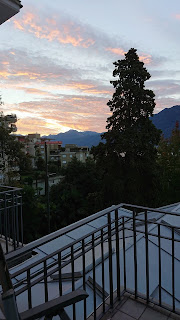 This past weekend, when Rick was playing a Hickory Championship in Ticino, I found myself staying mostly in the hotel. We were on a hill and at the bottom was mainly shopping, BUT the view was spectacular, I used the time to chill, write, read and when feeling brave check the news.

Without Sherlock, I don't remember when I felt so relaxed. I got to know a few of the staff in the process. One of the things I adore is finding out about people and building strings to other lives no matter if they are spider web fragile.

We are thinking of renting a small camper for future trips to reduce the risk of contamination. They'll only be the one bed to photograph, but the location of the bed will change. I am looking forward to that too.